Playing music is the first thing I remember being good at. I started playing at the end of 4th grade, and in 6th grade, I was first chair clarinet. I should probably worry that this is one of my proudest accomplishments in life even though it’s literally been 30+ years since then, but I really did work hard for that chair audition.

I was my high school’s first ever winner of the John Phillip Sousa band award. I never missed any performance, which included all concerts, all home basketball games for pep band, all home football games, and of course, marching band competitions. I remember riding the bus home from a marching band competition my senior year and thinking how much I was going to miss the feeling of marching and playing music.

I already knew I was going to the University of Iowa, and it was that day on the bus that I decided–I was going to try to make it into the Hawkeye Marching Band. And I did! (Fun fact: the Hawkeye Marching Band practices for 2 hours a day, 4 days a week, plays at every home football game and usually at least one away game, and earns one academic credit hour for the trouble.)

Truth be told, the marching band people weren’t really my kindred spirits; I liked the other kids in the band, but they weren’t my social circle. But I really did like marching and playing music, and all the spectacle and fun of being involved in Hawkeye Game Day traditions.

I was in the band for three years; I didn’t choose to do it my senior year. Sometimes I participate in alumni band at UI Homecoming, sometimes I don’t. But I still get all the Hawkeye feels when I hear a cymbal crash and the opening bars of the Iowa Fight Song. (Fun fact: written by Meredith Willson, of The Music Man fame.)

I’m a commuter. I drive from Coralville to Cedar Rapids for my job, and my companion radio station along the way has always been one of the area’s top 40 stations, KZIA, or Z102.9. Ten years ago, “Z” started having a Friday morning “marching band” on the days before Hawkeye football games.

I asked morning show co-host “Dancin” Eric Hanson how this tradition began. He replied: “The first few shows were in the studio, on a whim.  We tried to improvise “Dude Looks Like a Lady” by Aerosmith as we were getting nostalgic about being in the [Hawkeye Marching] band. For some reason, I was there, Shannon was there, Greg was there and so was Dawn (Greg’s wife, occasionally plays tuba). It ‘started’ that morning as we agreed to come back and in the first few years, it was just for the home games.” That was in 2009. (Fun fact: Eric Hanson and I were in the Hawkeye Marching Band at the same time. He obviously did find his kindred spirits there, as the Shannon he mentions is his wife, who stood next to me in the clarinet section.)

The other members of the band were recruited by that original group, or like me, heard them on the radio and decided to join in themselves.

Greg is Greg Young, introduced every week as the band’s music director. He’s the trumpet player who leads the band in its informal rehearsals, suggesting that maybe we start at the pickups to measure 5 instead of having a four measure tuba solo, for instance, and then that we end at measure 17 so as not to bore the audience with endless repeats of, say, “Land of 1,000 Dances.”

The group would more accurately be called a “pep band,” since no marching really takes place–other than when the band is in Cedar Rapids SaPaDaPaSo parade, or in the early days when the then-tiny marching band walked in a circle around tuba player Dawn as she sat in a chair on the front lawn.

The 20 or so members of the Z102.9 marching band arrive, assembling in the radio station conference room and grabbing the music provided by Z staff. If you or your kids have ever been in a marching or pep band, you’re familiar with these half-sheets of Stadium Jams or Rock Jams for Band–usually fairly square arrangements of rock and pop tunes. 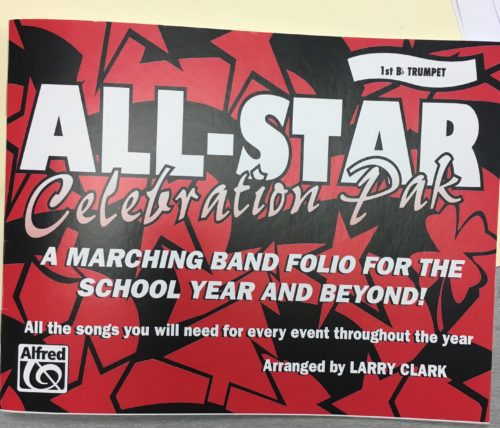 We begin the process of rehearsing, which usually involves sight reading the songs once. Twice, if we want to sound extra good that day, or if the first run-through was an absolute train wreck.

The band wends its way through the radio station’s bull pen, heading outside to play on the lawn. Unless it’s raining, which is bad for instruments. Or it’s kind of cold, which is bad for humans. Or if the wild turkeys on Cedar Rapids’ southwest side have taken over the radio station’s yard. The band are indoor pets, after all, and we don’t deal well with unpleasantries.

Most of us are Hawkeye Marching Band alums, or “fossils,” although some of the band members are wet-behind-the-ears radio station interns. There’s also one Iowa State grad, for some reason. (Fun fact: I went to junior high and high school with Iowa State Craig.)

The band is introduced by “Announcer’s Name,” who jokingly calls himself that even though we all know it’s usually Ric Swann, formerly of the Schulte & Swann morning show and now appearing on the sister station Smart-FM.

On Hawkeye football Fridays, at 102.9 on your FM radio dial, you can hear the Z102.9 Marching Band play its show. Real band shows have thematic elements that tie them together, something like “Songs from Earth, Wind, and Fire” or “The Music of John Williams,” for instance. The Z102.9 marching band shows also have themes, which are never immediately obvious, even to members of the band. There’s a script that ties them together esoteric items such as “Things That Are Round,” or “Fried Food,” or, on opening weekend of It: Chapter Two, it was “Scary Clowns.”

After the three “stadium jams” of pop/rock hits from the 1960s through today, it’s a cymbal crash into the Hawkeye-heart pumping Iowa fight song. Most of the band members still have this in their muscle memory from our own years in the Hawkeye Marching Band.

After the fight song, it’s a segue into the Victory Polka, which Hawkeye fans know better as, “In  Heaven There Is No Beer.” Then it’s hooting, hollering, “Go Hawks”-ing, and cut to AC/DC’s “Back in Black.”

After the show, the band usually gets breakfast. Biscuits and gravy provided by morning show co-host Clare is a particular band favorite. Then we go back to our jobs as bankers, student advisors, accountants, marketing professionals, and so on.

You can listen to the band on Hawkeye football Friday mornings. You can also watch, live or later, on the radio station’s Facebook page. You could even drive over the Z studio and watch from your car, if that interests you.

Or if you’re like me, and you just really like playing music and cheering on the Hawkeyes you, too, could join the Z102.9 band. They’re always looking for recruits, especially for the SaPaDaPaSo parade on St. Patrick’s Day-and they have won “best walking entry” more than once, making it an Award Winning band.

And remember, the response to “What’s the word?” Is always: “Fight, fight, fight!” 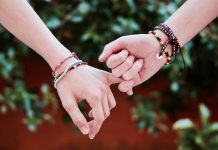 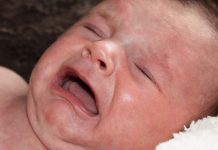 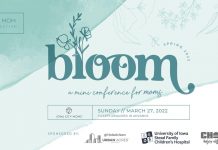