Facebook
Twitter
Pinterest
ReddIt
Email
Please stop sharing social media posts about stranger abduction for sex trafficking from public places. These posts are not true. They are urban legends designed to stir up fear while at the same time lull us into believing that if only we are quick-thinking and vigilant, we can protect ourselves and our children from tragedy.

These are just a scant few of the many, many similar posts that have circulated like wildfire for years on social media.

I mean, I get it. Kidnapping is every parent’s worst fear.

And women and girls are definitely at risk of harassment in public, which could include being followed — 81 percent of all women have experienced some form of sexual harassment. Sexual assault is also a real fear, as one in three women is the target of sexual violence each year (eighty percent of the time by someone they know). Human trafficking can and does happen anywhere in America.

However, kidnapping and sex trafficking don’t work the way these social media posts claim they do.

First of all, human traffickers tend to lure vulnerable teens over time, not violently force strangers into cars in crowded parking lots. Human trafficking is a “completely different crime” than kidnapping, according to Beth Boggess, FBI supervisory special agent for Colorado’s Violent Crimes Against Children unit. As she goes on to say in this article: “We don’t see kidnapping for human trafficking.”

Kidnapping is most likely to be perpetrated by someone the victim knows.

According to the National Center for Missing and Exploited Children, in 2019, of the 29,000 cases the organization worked on, less than 1% were stranger abductions.

The Polaris Project, a national organization that works to eradicate human trafficking, says that “the most pervasive myth about human trafficking is that it always, or often, involves kidnapping or physically forcing someone into a situation.”

In reality, “hauling [victims] off is too risky. Victims are recruited, manipulated, made dependent,” writes Lara Powers, an experienced professional in the anti-trafficking field, for the LA Times. In the thousands of sex trafficking cases Powers has encountered, she has “never seen, read or heard about a real sex-trafficking situation in which a child was abducted by traffickers in broad daylight at a busy store under a mother’s watchful eye.”

According again to Polaris Project, which worked on over 10,000 cases of human trafficking in 2018 alone, risk factors that make a person vulnerable to human trafficking include “recent migration or relocation, substance use, mental health concerns, involvement with the child welfare system and being a runaway or homeless youth.”

Some might think, even if the post may not be true, something like this could happen and, well, “better safe than sorry.” The harm is that spreading an unsubstantiated claim pulls law enforcement resources away from legitimate crime.

For example, the Coralville Police Department was contacted about the aforementioned Coral Ridge Mall scare, which was shared on Facebook almost 1,600 times. The department posted on its own social media, assuring readers that they had responded to no such incidents (though the trafficking post claims the police were involved) and calling the tie between car tampering and sex trafficking “inexplicable.” When I asked them on Facebook to elaborate, an officer responded in a private message, in part, “I do not believe there to be a large risk for women locally to be kidnapped/human trafficked.”

Worst of all, sharing these social media posts creates confusion about the realities of human trafficking and decreases the likelihood that real victims will receive the help they need.

Before you share, Google for news articles about the incident from reputable media organizations. If there were a large rash of stranger abductions from crowded public places of well-resourced, middle-aged suburban women, mainstream news outlets would report on it. Go to snopes.com, an established fact-checking website, and search some keywords from the post. To learn more about the realities of human trafficking, a truly sickening global scourge, consider reading Girls Like Us by Rachel Lloyd, a survivor of sex trafficking who now runs an organization dedicated to helping girls and women out of the trade.

Social media fakery has real-world consequences. If you care about victims of human trafficking, don’t share a post without fact-checking it first! 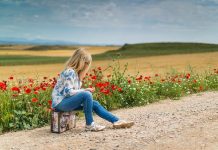 You Don’t Have to Struggle Alone: Eating Disorder Awareness 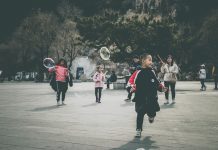 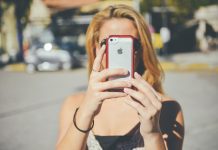 An Argument for Putting Down Your Phone

Celebrate Mardi Gras with these Events in Iowa City

Guide to Spring Markets and Craft Shows in the Iowa City...