I don’t think I’ve ever been so thankful that I have been extra-diligent about our budget this year. This derecho storm was not in our plans — but really when is an emergency planned?

But we had actually been able to save for an emergency fund and it covered the cost of replacing spoiled food following the storm. Now that we are “back to normal” I have shifted my focus outside of our immediate family.

I feel guilty that we didn’t “have it that bad.”

I worried about using our emergency fund — the entire purpose of which is to be used during an emergency. Sometimes I don’t understand how my mind works.

I drove up to my dentist’s office on Edgewood Road in Cedar Rapids on Friday morning after they didn’t answer the phone (I had a two-week follow-up appointment after ER dental surgery). I had strong doubts that this appointment would happen. All of the buildings along the road showed damage. It smelled; the food everywhere was going rancid. The roof of my dentist’s office was caved in; no appointment for me. The ramp I usually take to get back to I-380 was closed, so I had to figure out a new way to get home. 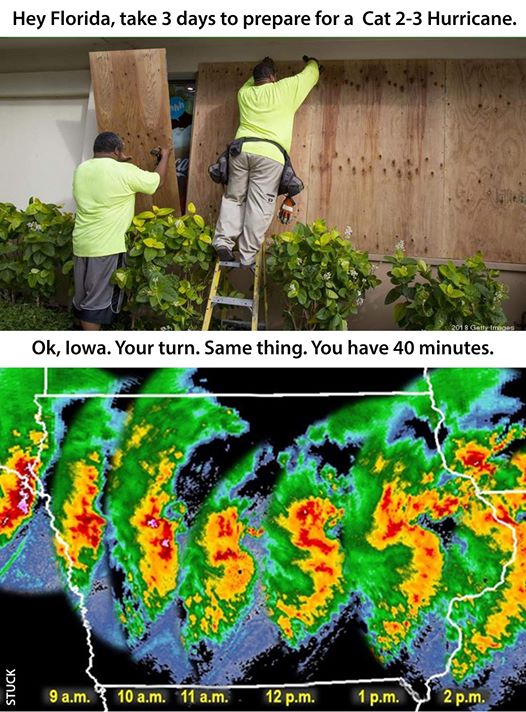 I started obsessively reading Facebook derecho storm group posts, seeking ways I could give and volunteer.

In some ways, I feel like this trauma-obsession has happened before: 9/11 and Sandy Hook are two tragedies that impacted me more than others. We have experienced a house fire, a house flood, thousands of dollars in home repairs after discovering our insurance policy didn’t cover what we thought it did. The Iowa derecho has only reported four deaths directly from the storm, so it isn’t tragedy or grief from loss of life. It is mourning the loss of memories, the loss of home and security, the loss of belonging.

This time, the tragedy is within driving distance. I can actively go and do something. How can I help others who definitely have it worse than me?

Over the weekend, we went shopping at Costco to get supplies to give to others. What size diapers would be the most helpful? I don’t know! I seemed to remember my children being in size 3 for a really long time, so I picked those. Does it even really matter when everything you have has been destroyed? Baby wipes so people could wipe themselves down without showers, bread and Nutella (because my children would always choose chocolate over plain peanut butter; it is nice to have something fun and unexpected), bottled water, and granola bars.

We’ve been on the receiving end of community help and gifts before. It felt good to be able to pay it forward. It doesn’t feel like enough, though.

Our family of six donned our masks (because, yes, there is still a pandemic happening!) and we drove up to Cedar Rapids. We exclaimed as we saw different damage as we drove along— the uprooted trees, the flattened fields, the buildings missing roofing or siding.

We cheered when we saw electric and gas trucks driving the same direction. Help was on the way!

We arrived at the donation center, and there was such a line of cars. We weren’t sure what was happening, so we parked on a side street. I went in to ask what we should do; we had brought supplies, and we were willing to deliver needed supplies. The woman at the check-in table said to keep the supplies, and she gave me the address of an apartment complex.

“Just take what you have over there,” she told me. She didn’t even ask what we had; I guess it really doesn’t matter when everything you have has been destroyed.

This apartment complex was heartbreaking to see.

Huge trees completely uprooted and lying sideways on the ground over the entire complex. Every building had damage. We could barely drive through because the branches and debris crowded so close to the parking lot. We didn’t see anyone at first, but then we found a group of residents in the courtyard area of one side of the complex. They had a canopy with a table set up. One was grilling some hamburger. We walked over and said we had supplies to give. They asked if we had bread and water; we did!

They explained this half of the complex was for disabled adults; the other half was for families. We gave half our supplies to them, and then drove to the other side to find the families to give the other supplies.

Everyone was so thankful.

They said no one had been there to help until that weekend. They were told they may not have power restored until mid-September because there are so many downed trees.
I didn’t feel that great as we drove away. It still felt so inadequate. Thankfully this community still has shelter; there are others throughout Cedar Rapids who do not.

People spent the week sleeping on the ground. Some community efforts have mobilized shelter locations for some of them, but it isn’t enough. There is so much that needs to be done, and the need will continue for months to come. This was no midwest thunderstorm. This was so much worse.

While we grieve what we have lost and the great devastation of our area, we also see the #IowaStrong community focus as neighbors come together. Additional help is coming from out of town, out of state, even out of country as Canadians drove down to help.

Ways you can help: 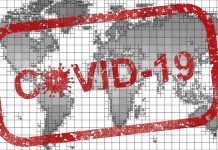 How to Prepare Your Child for a COVID-19 Test 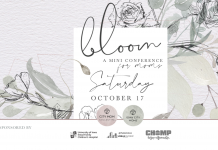 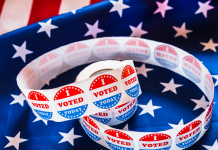 Election 2020: What You Need to Know in Johnson County

Iowa City Moms Blog - October 10, 2020 0
Plans are well underway for our 6th annual Bloom: Moms Morning Out, and although everything is looking very different this year, we are (as...